I’ve been taken to task by readers for not providing enough information about the world I’ve built in my novel. It’s a point well taken and one I struggle with when I force myself to sit down at the keyboard and starting spinning a tale.

Personally, I don’t like a whole lot of “info-dumping” in a novel. Give me the basics, tease me along the way, and I’ll figure it out (or not). It’s a fine line between too much and not enough, but, as for me, I’d prefer the “not enough” to the “too much.” I’ve put down a number of novels because I couldn’t put up with page upon page of narrative (or pointless dialogue) on why the world the characters live in works the way that it works. I got it, move along.

When my youngest son was a teenager he read J.R.R. Tolkien’s The Hobbit and loved it, so I gave him my copy of The Lord of the Rings. He brought it back to me a couple of weeks later and said he gave up. He couldn’t get past page upon page describing how, what and how often a Hobbit eats. And that was Tolkien!

I remembered that when I finally stopped dreaming about writing and actually started writing. I’m far from being an expert in anything, especially writing, but I wanted to give my take on the process of World Building and ask for ideas/arguments/pointless rants on the subject.

As for me, when I imagine the world I’m trying to build, I put the story first and the World Building second. It’s about the story, not the world I’ve imagined it taking place in.

I remember as a teenager sitting in a dark theatre watching Raiders of the Lost Ark. Those first 10 minutes changed everything about what I expected an action movie to look and feel like. The story grabbed you by the throat and drug you along and you’d better move your feet if you wanted to keep up. I loved it. Still do.

I look for the same thing in a novel. Tell me your story. I’ll jump into the deep end of the pool on whatever you’ve written and you keep me from drowning by throwing me a life preserver of information so I can tread water. Don’t send me a battleship of information overload, because when you do, I’ve lost your story.

I was once part of a novel critique group with other aspiring authors who read the first chapter of my novel and told me if I didn’t give details on the technology I explained on page three by the end of the chapter, then I had lost them. I let them be lost. It wasn’t about the technology, it was about the story.

For me the goal is to provide enough information to keep readers from being confused about the world I’m presenting them. By the end of the book, they should understand how this world works. If they don’t, I’ve failed. If I have more than a couple of paragraphs explaining a particular detail of the world I’ve built, I also consider myself to have failed. But that’s just me.

What do you think? At what point in World Building do you need to part from the story and build your world?

I am a middle child. Well, actually, my older brother is the middle child, but he is also the oldest of the boys, so I inherited the title and all the benefits that come with it.

When I became a teenager, because I could no longer fit under the couch, I became bored rather easily. I didn’t have a lot of friends, but I had an abundance of overactive imagination.

The summer of my 13th year, I must have been driving my Mom crazy with my questions and moaning about being bored, and my Mom yelled at me, “Go write a book.”

The first one was longhand in a notebook (I’ve still got it, somewhere). After my parents realized writing was occupying my time, my Dad brought me a Smith Corona typewriter to use, and I spent every minute I had pecking away to get the voices out of my head. He worked in a typewriter repair store at the time, so it wasn’t long before I got an electric one for Christmas. And I pecked away even faster.

I came up with an idea for a story when I was 15 that has occupied my mind for the past 37 years. It started as a simple fantasy, then turned into a horror and much later into a science fiction story. But the story was always pretty much the same, just the time and place changed.

I finally got the first part of it out of my head and into my hands a week ago. I’ve been reading it this week as a reader rather than a writer or editor. It’s not as perfect as I had hoped, but I’m satisfied that at least those voices aren’t screaming in my brain.

Looking back on it, I wonder if my Mom told me, all those years ago, “Go write a book” as reward, or punishment. Either way, thank you Mom.

Finally! Out of my head and into my hands.

Three more books in the next 20 months and I can finally let my mind slip blissfully into insanity. 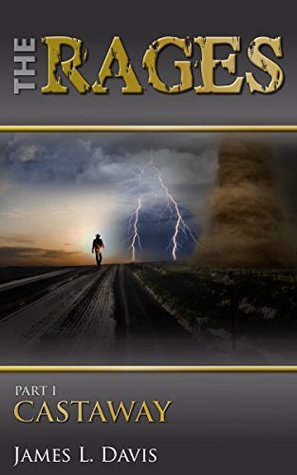 The idea behind The Rages and the Book of the Shepherds has been bouncing around in my head for decades. I blame it primarily for my unstable mental condition. But now it’s starting to scare me a little bit. Especially when I see stories like the one on MSN, linked below. In The Rages, Right to Income is a basic right of life and everyone gets a paycheck just for being a citizen. I thought it was a little far-fetched when I first thought it up, but I figured it’s science fiction, let’s add it to the mix and see what comes out in the plot. Now I’m starting to feel a little prophetic, and a lot worried for our future. The Seven Realms of Man is great to write about, but I’m not sure I want my children living there.

The Rages – Castaway will be published tomorrow, and as the hours tick away there was one item I wanted to provide on my website that I have neglected. It is right next to my “About the Author” button at the top of the page and is called “The Seven Realms of Man.”

On this page you’ll find an explanation of the people, places and things that make up The Rages and The Book of the Shepherds. I’ve disclosed no spoilers within, because that would be bad.

I created the page because I’m not particularly fond of page upon page of “info dumping” in a novel. For this novel, if I were to have done so, it would be biblical in proportion. I know some readers enjoy the experience of reading “world building” by authors, but I’m not one of them, so I try to keep it at a minimum in my writing. Two of my sons enjoy the occasional “info dumping” in science fiction and fantasy, but they’re electrical engineers, so I’m not sure they’re entirely human anyway.

I have done some “world building” or “info dumping” in The Rages because it’s a fairly complicated place and I didn’t want to keep everyone in the dark. But I’ve always preferred that an author give me a little tease and let me figure it out as they guide me along the path. I’ve tried my best to do that with The Rages.

Consider The Seven Realms of Man a road map for those who like the information up front, versus a tease. I’ll add to it from time to time, as the journey continues. I hope, in the words of Harley Nearwater, the protagonist of The Rages, that you find it “Int’restin’.”

jamesldavis02@gmail.com
The Dystopian Nation of City-State

Action points for the writer, entrepreneur, and thought leader who wants to write it down, get it done, and make an impact...

A blog full of humorous and poignant observations.

Author of Wildmind and Mindmage.

Global issues, travel, photography & fashion. Drifting across the globe; the world is my oyster, my oyster through a lens.

Meditations on Art and Life

Short stories and photos shared with humor and love